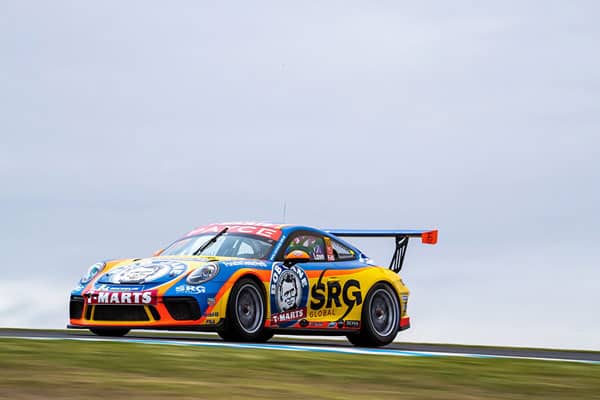 Wood was the star driver of the Formula 1 Australian Grand Prix round last season, winning the opening three races before getting turned around at the start of the fourth race. The Melbourne driver started this season’s Albert Park round in similar fashion, taking a lights-to-flag victory in the eight-lap race one.

The win wasn’t made easy by returning racer Dylan O’Keeffe, who pressured Wood throughout the race. Following three full-time Carrera Cup seasons, O’Keeffe made the move to the Super2 Series over the off-season however showed that he had lost none of his Porsche pace upon his one-off return, taking second place.

“Dylan has come back and was putting a heap of pressure on,” said Wood. “It’s good battling out there; I felt like I could get a little bit of clean air and then he’d reel me back in. It’s a good game and I’m loving it at the moment and to get the first race win of the year is bloody nice.”

While Wood was thrilled with the win, he hopes this round doesn’t have a similar ending to his 2018 Albert Park campaign. “It’s all a bit scary; we’ll just have to wait and see what happens in race four. We’ve got another three races to get through yet.”

Michelin Juniors Cameron Hill and Jordan Love were fighting for third on track – and much more. As part of the Michelin Super Round, the leading Michelin Junior driver for the Albert Park round will receive a trip to the FIA Formula E Berlin E-Prix in May. While Hill gained the advantage from the start, moving to third, Love eventually moved by in the closing laps to take third and the all-important advantage in the Michelin Junior round points.

Hill placed fourth from Adelaide round winner Nick McBride, Warren Luff and David Wall in seventh. The TAG Heuer Pro-Am honours were shared across Thursday; Sam Shahin was the best in the earlier qualifying session, however a strong start allowed Liam Talbot to move into the class lead and claim his second straight TAG Heuer Pro-Am race win after success in the final Adelaide race.

“I’m really stoked with the class win here at Albert Park after the race three win on debut a couple of weeks ago in Adelaide. I got a really good start which set me up for the race. It was an interesting race, the Pro drivers were all going pretty hard in front of me and were slowing themselves up so it was good to trail them and take the class win,” said Talbot. Shahin placed second in class for race one from Roger Lago, Stephen Grove and round one class winner Anthony Gilbertson in fifth.

The opening race at Albert Park had one safety car intervention following a three-car accident between Steven Richards, Josh Hunt and Joey Mawson. While Mawson was the only driver of the trio to continue, ultimately finishing 17th, his 911 GT3 Cup sustained damage that will prevent him from returning to the track this weekend.

Porsche PAYCE Carrera Cup Australia will return on Friday for race two at 2:55pm, while race three and race four will be held on Saturday and Sunday. All three of the remaining races will be broadcast live across Network Ten, Fox Sports and Kayo.