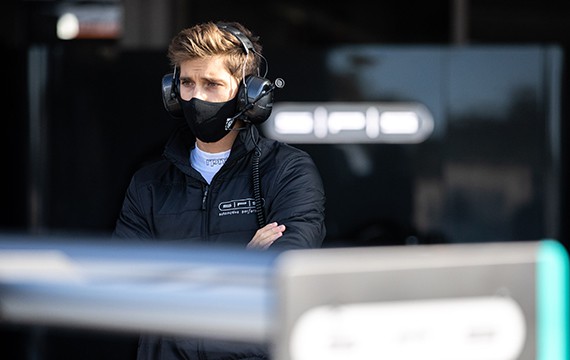 Jordan Love is one of the most promising sportscar drivers to emerge from Australia in recent times.

For the 2022 season, the talented 22-year-old is competing in one of the world’s most competitive GT3 endurance championships – the Fanatec GT World Challenge Europe powered by AWS Endurance Cup with Haupt Racing Team.

His motorsport story began at the age of nine in go karting, finishing second in the West Australia State Championship in only his first year of competition. A very successful karting career followed winning numerous championships before making the shift from karts to formula car racing.

In his first year in international competition, Jordan won 14 out of the 15 Asia Cup races to become 2015 Champion in Formula BMW. A season in Formula 4 followed in 2016, finishing third in the Australian championship with 5 wins, 11 podiums and 4 fastest laps. Love’s first laps behind the wheel of Porsche Cup Car then came when he contested the Bathurst 12-Hour in 2017, finishing third in class.

Jordan’s natural progression to Porsche Michelin GT3 Cup Challenge in 2017 saw him amass the third highest number of race victories in the championship’s history, winning both the outright Championship as well as being only the second recipient of the Porsche Junior Scholarship. He then took on the Porsche PAYCE Carrera Cup Australia in 2018, finishing fourth in his first season, with 2 race wins, 1 round win and 1 lap record.

2019 saw Jordan achieve the goal he set out for at the beginning of his Porsche program in Australia, securing the 2019 Porsche Carrera Cup Championship. After making a consistent start to the season, Jordan’s hopes of a championship were all-but-over following an incident which saw him break his hand and drop down the championship order. Despite the setback, 6 back-to-back race wins and a further 5 victories saw the Perth-born star overcome a 206-point deficit to become the youngest driver in the championship’s history to win the title.

The following season, Jordan achieved his next goal of making the move to Europe after obtaining a drive in the Porsche Mobil 1 Supercup Championship. Renowned for being the toughest one-make championship in the world, Jordan was selected by Porsche to in the rookie talent pool for the year.

The season was greatly affected by the pandemic, but Jordan remained focused for the rescheduled calendar of back-to-back events. His challenge for the season was increased due to having to learn each of the circuits, but he remained undeterred and scored consistent points finishes, including a 7th place which was the team’s best result of the year. Jordan’s regular points finishes saw him claim 10th in the championship – above his more experienced and previous race-winning teammate.

The 2021 season saw Jordan return to Europe – progressing to GT3 competition with the Mercedes-AMG GT3 of SPS Automotive Performance. Together, they claimed an excellent fifth place in the Silver Cup at the revered 24 Hours of Spa-Francorchamps.

For 2022, Jordan returns to the GT World Challenge Europe Endurance series, as he joins Haupt Racing Team to contest the Silver Cup in the #4 Mercedes-AMG GT3 alongside Jannes Fittje & Alain Valente.