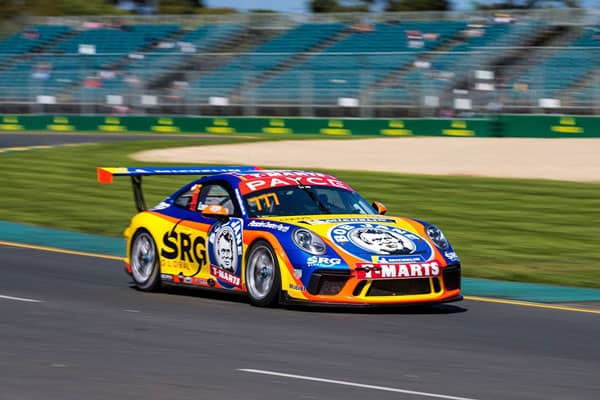 BOTH Porsche PAYCE Carrera Cup Australia titles will be decided on the streets of Surfers Paradise after both the outright and TAG Heuer Pro-Am title leads changed hands following the penultimate round of the season at Mount Panorama.

Jordan Love completed a remarkable sweep – this third of the season – on Sunday morning at Bathurst to top off his meteoric rise from his Darwin Injury – reducing a more than 200-point deficit to nothing in the space of just six races.

The Bob Jane T-Marts driver now leads the championship by just two points, having overhauled his teammate Dale Wood thanks to six straight victories from the last six races.

Adrian Flack, meanwhile, ceded the race lead to Liam Talbot in today’s nine-lap affair but still emerged from the weekend as the new TAG Heuer Pro-Am class leader heading to the Gold Coast.

Talbot, who proposed to now-fiancee Charli Robinson on the grid prior to the race, finished second in class and trails the leader by just six points with a round to go.

However in front of the field was Jordan Love, who fended off fellow Porsche Michelin Junior Murray to sweep the round and race his way to the title lead.

“I certainly didn’t expect to be in the lead of the championship after this weekend,” he said. “It was great at weekend, credit to the boys. The car was mint all weekend.

“We were fast here last year, and I had some good confidence from the Tailem Bend round, but I had to keep its clean at the same time.

“We probably weren’t the fastest car out there, especially in the first and the last race, but we always had good track position, I pushed hard when I needed to and I’m pretty happy to come away with this.”

Love said obtaining the championship lead with one round remaining was a surprise, given the misfortune he suffered earlier in the season.

“After Darwin, I didn’t think we’d be in this position. You always want to have belief in yourself, but I never thought that this would be the case coming out of this weekend.”

Today’s race was a clean affair with Love leading Murray into turn one. The pair were never split by much more than a car length for the duration, the Sonic car having just enough in reserve to hold off the repeated attacks from Murray.

Cameron Hill completed his charge through the field following a race-one DNF in sixth position while former championship leader Dale Wood made ground, however could only manage seventh and lost the title lead by two points.

Talbot finished eighth to win the TAG Heuer Pro-Am class in race three after an exciting, mid-race pass on Adrian Flack around the outside at the chase.

Flack, who finished just behind his season-long class rival, made a superb start and comfortably led his class early before being caught and passed by Talbot’s Wall Racing machine, the latter now trailing Flack by just six points heading into the season finale’.

“By the end of the race Liam was hunting me down and I had no answer for him – it was a good stoush all weekend and I really enjoyed it,” Flack said.

“From where we started at the beginning of the year where we crashed the car and it was a bit of a disaster. We’ve fought our way back and put in the effort. The results have come and I’m really, really happy.”

The final round of the 2019 Porsche PAYCE Carrera Cup Australia will see the championship go down to the wire on the streets of Surfers Paradise on October 25-27.

Four drivers remain in contention for the overall championship with David Wall 94 points from the lead and Nick McBride 151 back; 180 up for grabs across the three races.

Flack, Talbot and Lago are the three in contention for the TAG Heuer Pro-Am class.