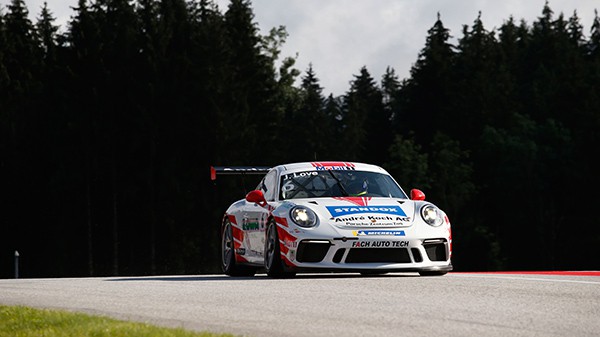 After two weeks in Austria, it’s time for the Porsche Mobil 1 Supercup to move on to its next destination: Hungary. FACH AUTO TECH will be looking to make amends in the third round of the season at the Hungaroring, near Budapest, after a disappointing start to the season for Jaap van Lagen and Jordan Love. The objective is clear: fight for the podium.

The Hungaroring is a challenging circuit, but FACH AUTO TECH and Jaap van Lagen know exactly what it takes to go quick here. In 2018, the Dutchman qualified fifth and went on to finish third, securing his second podium of the season for the Sattel-based team and its Porsche 911 GT3 Cup car.

The benchmark is just as high this year, as Team Principal Alex Fach explains: “We made a sluggish start to the season in Austria, but we already saw an improvement in race two. Now we have to build on that and battle for a podium finish in Hungary. That is our objective.”

Round three of the season marks Jordan Love’s debut at the Hungaroring circuit. The reigning Porsche Carrera Cup Australia champion is competing in his maiden season in the one-make Porsche series. However, the young Aussie feels there is room for improvement despite a pair of top 15 finishes: “We were able to lay the groundwork for the season at the Red Bull Ring but I definitely think there is potential there. I still have a lot to learn and can’t wait to get back on track.”

The weekend begins with the customary Free Practice on Friday evening. The lights go green for the race on Sunday, 19 July, at 12:25. Both Eurosport 1 and SPORT1 will be broadcasting the race live.