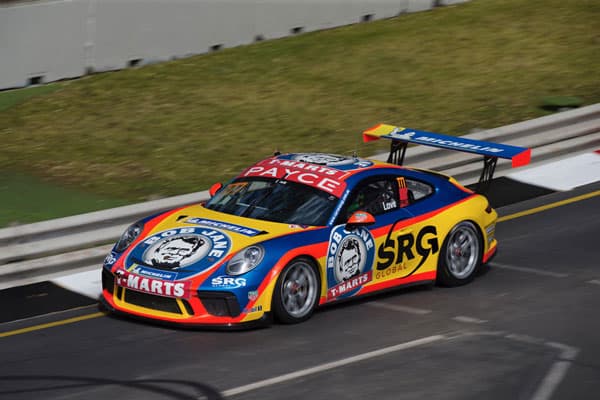 Cooper Murray dominated Races 2 and 3 of Porsche PAYCE Carrera Cup Australia in Townsville, breaking yet another record for the biggest race-winning margin in the series’ history.

The Michelin Junior Driver put in a master class performance in the first of the Sunday’s races. Starting from pole for the 45min Enduro Cup round, Murray got the whole shot ahead of McElrea Racing teammate Warren Luff, to lead down the long Townsville straight toward Turn 1.

Showing great tenacity and maturity beyond his years, Murray fended off Luff in the early stages of the opening lap, before pulling out a 0.5sec lead. Behind the McElrea Racing pairing, Sonic Racing teammates Michael Almond and Dale Wood jostled for position, with Jordan Love and Nick McBride making good progress through the field.

Murray recorded the fastest lap of the race on lap 4 and extended his lead to Luff by 2.7secs. Luff then struck one of the sharp kerbs that characterize the Townsville track. The No Second Chance ambassador’s bent front damper and the resultant damage saw Luff get passed by Michael Almond and leaving Murray to extend his lead to 4.9secs with 13 laps remaining.

Further back, Roger Lago could not replicate the pace he showed in qualifying the previous day, gradually slipping down the field from sixth overall to tenth by mid race. He would eventually finish 14th after contact late into the race with Thomas Maxwell.

Anthony Gilbertson by contrast was on a charge in Race 2 and proved to be the pick of the TAG Heuer Pro Am field. Gilbertson replicated the form he had showed throughout practice and moved past Lago to finish first in class and ninth overall.

After the race, the McElrea Pro Am driver said, “I got a great start and had a bit of work to do with Roger starting in P5. The Pros must have hustled getting passed him because the next thing I knew I was right on him. I passed him and pulled a good gap while keeping Steve Richards behind me.”

“It’s always a good feeling to beat a Pro like him” Gilbertson continued candidly.

At the end of Race 2, Murray had amassed a lead of 11.4 secs over Almond in second. This was the biggest race-winning margin in Porsche PAYCE Carrera Cup Australia’s history. The previous record was 6.2 secs held by Steve Richards over Warren Luff in Race 2 back in 2014.

As the Porsche 911 GT3 Cup cars lined up for Race 3, all eyes were on Cooper Murray to see if he could defend his round position and make it five different winners from five rounds this season. Michael Almond initially got the jump on Murray off the line but the 17 year old held is his nerve and the lead into turn 1. The pair exited the corner side-by-side but Almond quickly lost ground on the outside of the turn allowing Sonic teammates, Dale Wood and Jordan Love by.

In the TAG Heuer Pro Am class, Gilbertson’s good luck ran out with a poor start seeing the Race 2 winner drop down the field to 13th. His recovery through the field ruined what had been a stellar race weekend until that point, after he made contact with Pro driver, Steve Richards. As Pro Am drivers are permitted to use ABS – to level the playing field with the Pro drivers – Richards braked earlier than Gilbertson expected. The contact spun the former Bathurst winner into the outside wall, blocking Sam Shahin and Scott Taylors race in the process. The damage to Richard’s stranded O’Brien Electrical & Plumbing Porsche meant the safety car would have to be deployed. The DNF for the former Bathurst winner makes 2019 the unluckiest season of his career.

Murray made the best use of the restart, accelerating hard onto the main straight with 12 laps remaining. The Michelin Junior would proceed to pull out a 1.7 sec gap on the experienced Dale Wood and leading Juniors Jordan Love and Cameron Hill. As with Race 1 and 2, the youngest member of the McElrea Racing squad would manage the tyres and his lead to the flag.

After Gilbertson’s early woes, it was fellow McElrea Racing teammate Tim Miles who would seize the opportunity in TAG Heuer Pro Am class, passing Dean Cook and Roger Lago under braking in the final stages of the race. While Murray and Lago’s record breaking performances over the weekend would prove the talking points of the Townsville round.

What was of greater significance for the 2019 Championship was the return of McElrea Racing cars to form after Sonic Racing’s recent dominance. The battle among these two top teams – as well as the likes of privateer Cameron Hill – is as fierce as ever, as the crews now switch their attention to Round 6 of the Porsche PAYCE Carrera Cup Australia Championship in Tailem Bend. This fast, flowing South Australian track is tailor made for Carrera Cup cars and traditionally proves to be very hard on tyres.