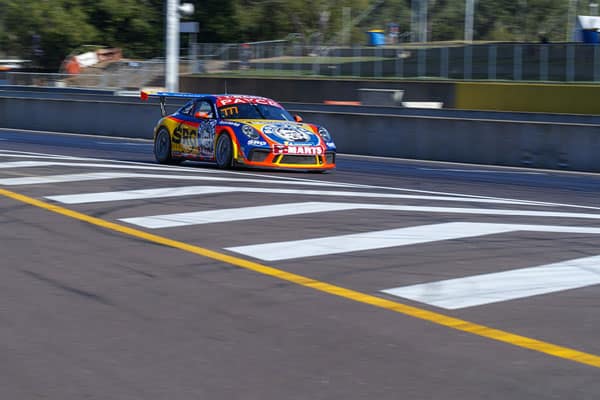 Jordan Love has returned to peak Porsche PAYCE Carrera Cup Australia form at the best possible time, sweeping all three races, the round and the lap record at The Bend Motorsport Park in South Australia.

The crushing performance delivered the 20-year-old Sonic driver his first wins since Phillip Island in May and also ensured he sealed the Porsche Michelin Junior driver nomination towards the Porsche Shootout in Europe later this year.

Though both races featured competitive early battles for the lead, Love was essentially untouchable in both of Sunday’s races to the point where he re-set his own lap record on the final lap of the final race.

His second clean sweep of the season saw him beat David Wall in the overall round results, while Adrian Flack was an outstanding third outright – also taking the TAG Heuer Pro-Am round in a stunning weekend.

To make matters even better, Love has now closed to within 90 points of series leader Dale Wood going into the final two rounds of the year.

“It was an awesome weekend to come away with pole and three wins is awesome, but I can’t go without thanking the boys at Sonic for providing me with an awesome package this weekend,” Love said.

“I’m hugely excited to wrap up the Michelin Junior drivers title – it’s been one of the goals since we started in GT3 Cup Challenge two years ago – really happy to lock that in the bag but there’s still two rounds in the championship to go so I’m really looking forward to Bathurst and the Gold Coast.”

After Pro-Am class rival Liam Talbot finished third outright in Race one, Flack repeated that performance on Sunday morning before then finishing fourth in the final race.

That secured him an historic spot on the outright podium but also a comfortable win in his class over Talbot and Roger Lago.

“I couldn’t have asked for a better weekend,” Flack beamed on the podium.

“It’s really nice to get up there and mix it with the Pro’s. I’ve always felt we should be up there somewhere, at some stage, so to be up there this weekend is awesome.

Sunday’s program started with the fourth round in the enduro cup series with the 20-lap dash providing plenty of thrills.

After finishing second in race one, Cameron Hill erupted into an early lead in race two and led the first lap; however a brake lock-up at turn one on the start of lap two saw him run off the road – damaging the front splitter of his car and dropping him to third place.

While Nick McBride assumed the lead and Jordan Love second, Hill then suffered more misfortune two laps later when a puncture, combined with the lack of front downforce, saw him run off at turn five and forced to take a visit to pit lane to repair the damage.

While he recovered a lap down, McBride held on for the next seven laps before Love’s storming pace saw him slip by on lap eight – ultimately pulling away to record a strong victory.

McBride slipped to fifth at the finish, behind David Wall, Adrian Flack and Cooper Murray – who stormed from the back of the field to fourth.

The third race was a more straightforward affair and saw Love lead the entire distance from pole position.

Murray leaped to second thanks to a strong start, however surrendered the spot to David Wall on lap five after a moment at turn 13.

The leaders finished in that order, while Flack maintained fourth place to secure his outright podium and class win. Duvashen Padayachee was fifth, banking his best finish of the season after running with the leaders for a majority of the race.

The Bend winner Adrian Flack has charged to third in the standings, 54 points behind Talbot.

Wood’s recovery effort in race two saw him move to the lead of the Endurance Cup standings with two races to go, the Victorian now holding a six-point lead over Warren Luff with former leader Michael Almond third.

The next round of the Porsche PAYCE Carrera Cup Australia championship will see the series return to the iconic Mount Panorama circuit in New South Wales for the Supercheap Auto Bathurst 1000.