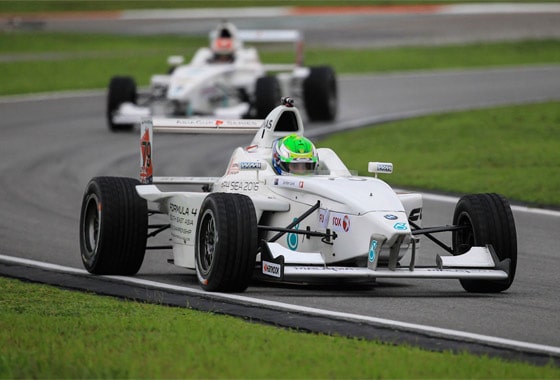 Love crowned AsiaCup Series champion, gets a taste of the F4SEA car

With a stunning 93% win rate in a campaign that produced 14 wins out of 15 races and 289 points that saw Australia’s Jordan Love (#79 AUS) crowned the final AsiaCup Series champion, the youngster also walked away from the final event with the AsiaCup Super 6 champion’s title. After what has been an otherwise stellar 2015 AsiaCup Series season, Love was also given the privilege of giving the Formula 4 South East Asia Championship racecar a shakedown during the new championship preview ceremony in Sepang on Sunday.

Coming off a sublime form that produced a clean sweep of five race wins at the second event of the series last month, Love looked the favourite to extend his winning streak. Starting the four-day bumper weekend with qualifying and the first race on Thursday, the youngster was however denied pole position when Malaysian Adam Khalid (#5 MAS) outgunned him in qualifying.

Undeterred, the Aussie ace adopted his trademark flying starts in the first race in wet conditions to take an early lead, one he did not relinquish throughout the 10-lap race. Despite coming under some pressure from AsiaCup Super6 contender and fellow Australian, Drew Ridge (#4 AUS) in the closing stages of the race, Love had done enough to fire the opening salvo of the weekend with a win in the first race.

Friday’s schedule of two races began with Race 2 in the morning again in wet conditions. After a master-class demonstration in the previous day’s race, this time Love was given a run for his money by Ridge as the pair fought for the lead of the shortened 7-lap race. After an epic duel that led to several position changes between the duo, Love eventually managed to take the lead from Ridge and quickly established a commanding gap over his compatriot. Finishing the race well ahead of the rest of the field, the result was also his 12th consecutive win of the season. 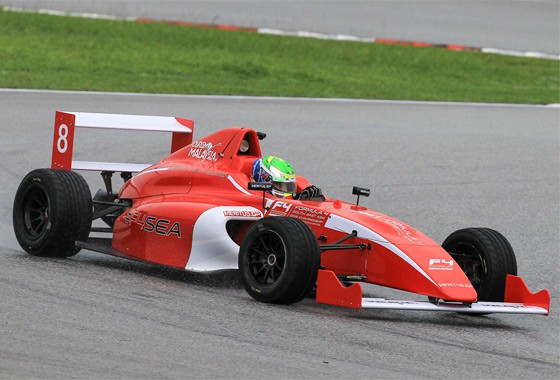 Taking pole position for the third race in dry conditions for the first time, Love looked poised to claim his 13th win of the season. However, the 16-year old was denied the chance when he failed to make the start when he pulled into the pitlane before the end of the formation lap with a mechanical problem. With his pit crew working to resolve the problem, he did rejoin the race only to retire shortly after, his first and only non-finish of the season.

Though Adam Khalid would again deny him pole position for the fourth race on Saturday, Love was able to make easy work of the Malaysian with his trademark start to beat Adam Khalid for the lead into the first corner. Overcoming the disappointment of his non-finish from the previous day, Love put his aggression to good use with a series of fast laps before smashing the AsiaCup Series lap record with a stunning 2:15.646s time en route to an unchallenged 13th race victory.

With a pole position start for the fifth and final time in the AsiaCup Series on Sunday morning, the Aussie Ace once again put his now-trademark explosive start to good use, jumping out to an unassailable lead by the first lap. Unaffected by all the drama that took place behind him, Love continued to drive an imposing race crossing the finish line for his 14th win of the season, a dozen seconds ahead of his closest rival, Drew Ridge who edged Adam Khalid in a photo-finish.

The weekend’s sixth race being an AsiaCup Super6 race was again a Jordan Love affair in extremely wet conditions following a heavy downpour prior to the scheduled start. Though abating slightly, the continuous shower made it a difficult affair, particularly for those starting behind Love, starting from pole position. Proving himself as the weekend’s rainmeister, Love seemed unaffected by the conditions, producing an impressive race to also wrap up the AsiaCup Super6 event as the overall champion to add to his AsiaCup Series crown. 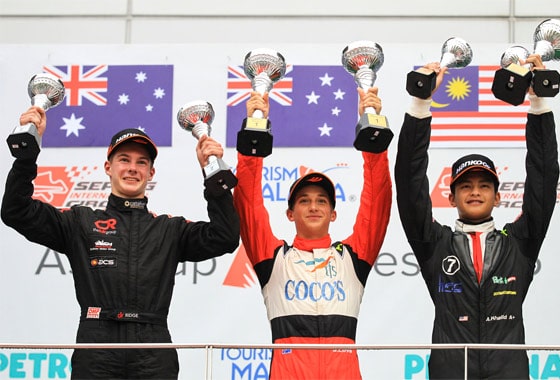 “I am really happy with the end result we got. Obviously going into the season, it was not something I thought at the start that it would be possible to win the championship. Towards the end, it did start to become a real possibility. I never went into the race thinking I would win but to come away with 14 race wins out of 15 races is something I am incredibly happy about. In the penultimate race of the season, I managed to set a lap record for the three years of the series, which rather puts it into perspective all the driver coaching I have received and all the training I did, which was paid off with that lap time.

“That one race that I did not manage to get a win or a podium was a bit of a bummer but it was something I had no control over, but I still came away with the overall championship, is amazing. And to close out the season with the Formula 4 shakedown was amazing and I cannot wait for the new season. I would really like to thank my family who has been incredibly supportive throughout. My thanks to everyone in the team, Peter (Thompson), Firhat (Mokhzani), Sean (Thompson), and to my crew who were so awesome.”

“You really cannot ask for a more exciting final season of the AsiaCup Series than the one we have just witnessed. Since the start of the season with the first event in August, it has been incredible watching Jordan Love who did a phenomenal job winning 14 races out of the 15 contested this season. You cannot ask for a more worthy champion than Jordan. With his talent, work ethic and great personality, we can expect to see Jordan chalk up even more success in the future. I am also very happy that Jordan who is our 15th champion will be joining us for the F4 South East Asia Championship next season. As a reward for his incredible season at the last AsiaCup Series, Jordan was able to get a first taste of the new Formula 4 South East Asia Championship car when he gave the car a shakedown during the reveal at the end of the event.”

* *result only counts to the AsiaCup Super6 Series
** Guest driver

*results only counts to the AsiaCup Super6 Series

*results only counts to the AsiaCup Super6 Series
** Guest driver