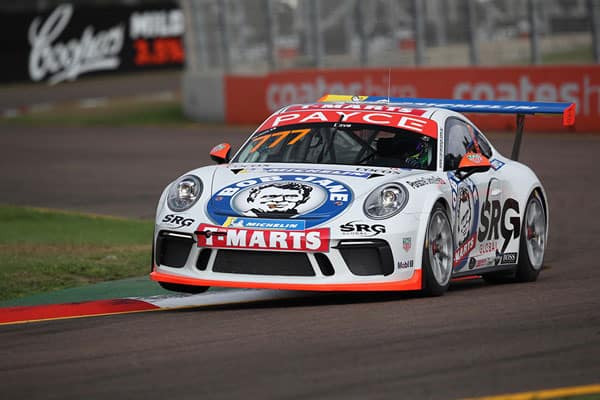 Jordan Love is not affected by his injured hand, posting the fastest time from the first practice sessions of the Porsche PAYCE Carrera Cup Championship in Townsville.

It’s been a testing few weeks for Jordan Love. After spate of victories in both Albert Park and Phillip Island rounds, an unfortunate accident in Darwin put the brakes on his 2019 championship campaign. The resultant surgery meant a two week break from behind the wheel heading into Round 5 this weekend. No one could be sure what part his injured hand would play in his performance in Townsville.

Maxwell was closely followed by championship leader, Dale Wood, who was less than 0.02 secs behind the young Darwin driver by the time the first session ended. Wood’s experience and knowledge of the coastal circuit could well prove the difference this weekend. Other experienced Pro campaigners, Michael Almond and Warren Luff were third and fourth respectively, while another Michelin Junior, Cooper Murray completed the top five in fifth.

In the TAG Heuer Pro-Am class, Anthony Gilbertson proved again that his performances on the streets of Adelaide in the season opener were no fluke, recording the fastest time of the class ahead of Roger Lago, Sam Shahin and Dean Cook. The wet session saw most drivers cautiously getting to grips with the fast 2.9km circuit, building their confidence in the challenging wet conditions.

Rain persisted to fall before the second practice session, but just as the drivers ventured out, the sun appeared and the times soon began to tumble as a dry line emerged. Dale Wood again set a blistering time, topping the standings for most of the session.

On his return to the pit lane, Wood remarked, “To be honest I was surprised how quick the track dried. The whole field went out on wets and straight away I said to the team that I’m coming in and we need to put slicks on.”

‘When I went back out the track was faster than I expected despite some wet areas. If we get a good dry, run in qualifying tomorrow, I think the pace will be even better.”

But in the dying minutes, Love would steal the top spot from his Sonic team mate with only 2 minutes to spare.

After the second practice drew to a close, a relieved Love commented, “We pitted late as we had a good set of Michelins to bolt on for that session. Judging by the pace of the guys in first (session) we knew the car would be fast as we were just growing in momentum each lap. I didn’t feel too comfortable early on but I knew the car was good and managed to step it up for the second outing.”

“It’s good to get a result like that ahead of tomorrow. My hand’s not painful thankfully, and I just notice it over the bumps, it’s just a bit annoying to be honest.”

Gilbertson again set the pace in the TAG Heuer Pro-Am class but found the conditions tricky with the drying circuit:

“It was difficult to tell how much liberty you could give the car as the track was still wet in parts, but we still went faster than the first session. You just didn’t want to drop a wheel off (the circuit) anywhere in that session, so there is still time out there.” Gilbertson remarked

Qualifying and races 1-3 will all be televised live on both Fox Sports (Channel 506) and Kayo, while free-to-air viewers can also watch the first and last races of the weekend on Channel 10.