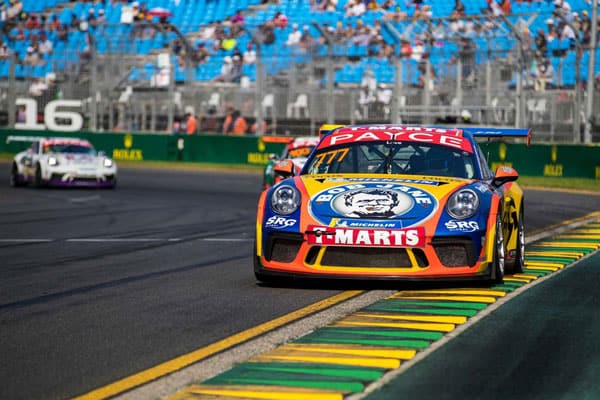 The fifth round of the 2019 Porsche PAYCE Carrera Cup Australia Championship sees a return to north-east coast of Queensland this weekend. The last time Australia’s premier one-make category competed in Townsville was in 2015, while this year’s event marks the 119th round in the history of the series, since it began in 2003.

As the largest urban centre north of the Sunshine Coast, Townsville is affectionately referred to as the unofficial capital of North Queeensland by its local community. Victory in the third and final race in Darwin in the last Porsche PAYCE Carrera Cup round earned Michael Almond not only overall victory, but the unofficial title of ‘the ‘King of the North.’

The Bob Jane T- Marts driver will hope to hold onto this crown and repeat that performance in Townsville this weekend, a track that has proved a happy hunting ground for the Sonic Motor racing team in previous years.

In 2015, it was Sonic’s Nick Foster who stood on the top of the podium after all three race victories at Reid Park and this year the team looks likely to repeat that trend given the pace its race winning drivers – Michael Almond, Jordan Love and Dale Wood – have shown to date this season.

Sonic Motor Racing cars have finished on the top two steps of the podium in eight of the last nine Porsche PAYCE Carrera Cup Australia races, including a hat trick of victories over the last three rounds. The only race in that period they didn’t cross the line first was Race 1 at Hidden valley which went to Michelin Junior, Cameron Hill.

The last Carrera Cup team to win four rounds in a row in Sonic’s fashion was Fitzgerald Racing Services with driver Craig Baird in 2008 across Barbagallo, Sandown, Queensland Raceway and Phillip Island.

Of the leading Sonic Motor Racing trio, Jordan Love is the most vulnerable heading into this weekend, after an unfortunate opening lap altercation with Liam Talbot, saw the Bob Jane T-Marts driver leaving the Hidden Valley circuit with a broken fifth metacarpal in his left hand.

While the resultant surgery – a plate and seven screws – meant that Love would need a quiet, yet quick recovery if he was to compete in Townsville, the ramifications for his Championship campaign were far greater. No points from an eleventh position in race one, a DNF and no result for races 2 and 3 in Darwin respectively, meant the Perth youngster would not only lose his overall lead to the experienced Wood, but also now come under threat from an hard charging Cameron Hill in the Michelin Junior competition.

Hill carries good pace and momentum into Townsville after his maiden pole and victory in the Porsche PAYCE Carrera Cup Australia Championship. With only Townsville and Tailem Bend points in the Michelin Junior competition remaining, all eyes will be on Hill’s Seears Workwear Porsche and if it will challenge the injured Love.

Adelaide winner, Nick McBride lies third just behind Wood and Love in the overall Championship. McBride’s experience around the Townsville circuit will be beneficial as one of only six current drivers (Nick McBride, Steve Richards, Roger Lago, Duvashen Padayachee, Michael Almond, Scott Taylor) on the entry list to also contend the 2015 Carrera Cup Championship at the same venue.

Wood along with McElrea Racing’s Warren Luff will use their track knowledge from passed Virgin Australia Supercars races in Townsville to good use in the podium hunt. Luff will also rely on the local knowledge of his Queensland based team, as McElrea cars currently hold both the qualifying (Alex Davison) and race (Jonny Reid) lap records.

The PAYCE liveried Porsche 911 of David Wall will also be hoping to improve upon his early season form with the 2017 Champion celebrating his 55th Carrera Cup Australia appearance, moving past the likes of: Rodney Jane, Alex Davison, Max Twigg and Stephen Grove, on the all-time round starts list. Wall now sits third on the list behind only Marc Cini (105) and Craig Baird (66).

Grove (2) and Roger Lago (1) have tasted victory in Townsville in previous years in the TAG Heuer Pro-Am Class.

With warm temperatures and a 30-70% chance of thundershowers forecast over the course of the weekend, the conditions will test the skill and nerve of all the Porsche PAYCE Carrera Cup drivers. The race schedule for the weekend starts on Friday with two early practices sessions, which teams will use to refine their race set up before heading into qualifying on Saturday morning.

Qualifying and races 1-3 will all be televised live on both FoxSports (Channel 506) and Kayo, while free-to-air viewers can also watch the first and last races of the weekend on Channel 10. A highlights package including the weekend’s action is also scheduled for Channel One following the conclusion of the event