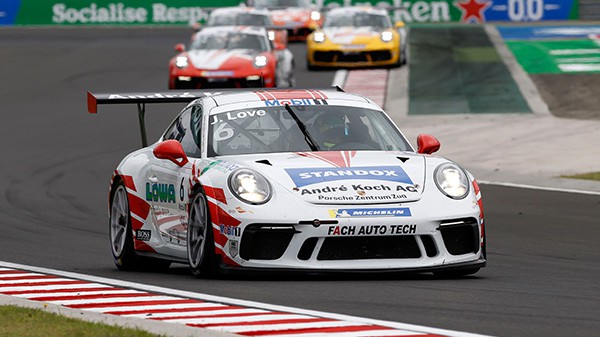 The third round of the Porsche Mobil 1 Supercup season in Hungary was full of drama and excitement for FACH AUTO TECH. After a lightning-quick start, Dutchman Jaap van Lagen was within touching distance of his first top 5 finish of the season. However, an incident caused by another car dashed any hopes of a top finish. The disappointment was alleviated somewhat by an eighth for teammate Jordan Love, marking the Australian’s best ever finish in the one-make Porsche series and his first Rookie podium.

For Alex Fach and his team, round three was all about moving forward. “It was clear that we have made a step forward since Spielberg,” the FACH AUTO TECH Team Principal said after the race. “The pace to be among the leaders is there, so it was all the more disappointing to see our race end the way it did.”

The reason for Jaap van Lagen’s retirement was an incident involving the Dutchman and Jaxon Evans. The pair were engaged in a wheel-to-wheel battle after van Lagen had made his way past the young Kiwi. Evans attempted to recover the position but couldn’t find any way past the FACH AUTO TECH Porsche. What began as an attempted overtake ended in a collision, costing Jaap van Lagen his race. The race director pinned the blame for the incident firmly on Evans.

The race ended in a more pleasing manner for Jordan Love. The young Australian put together an excellent drive from 14th on the grid to finish in eighth position. “I’m happy with that result,” the 21-year-old said. “I made up three places on the first lap, and that was a great foundation for my maiden top 10 finish and the third in the Rookie class.”

After a non-stop three weeks, the first third of the Supercup season is already in the books. The next race sees the teams travel to Silverstone in the UK from 31 July to 2 August.