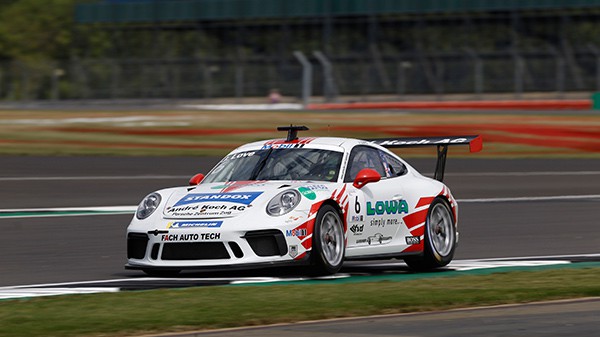 The second race weekend at Silverstone Circuit did not provide the top result FACH AUTO TECH had been hoping for. Jaap van Lagen finished in 13th position after the 13-lap race, with teammate Jordan Love forced to retire his Porsche 911 GT3 Cup on the first lap after being involved in an accident.

“It was a disappointing weekend for us,” said Team Principal Alex Fach. “We tried a few things out in Free Practice, but unfortunately the changes didn’t have the desired effect. The field is super competitive, as qualifying showed, so everything has to fit. We wanted to make the best out of the situation, but we only partially succeeded. The early retirement for Jordan through no fault of his own left a bitter taste in the mouth.”

Jaap van Lagen was in full attack mode right from the very start of the race. After a closely fought qualifying session, the Dutchman started the race from 16th on the grid. However, the FACH AUTO TECH driver’s battle through the field was cut short early in the race by a safety car period. At the restart, van Lagen found himself in twelfth position and ultimately crossed the finish line in 13th.

For Jordan Love, the race was over almost before it had even begun. The Australian in the #6 Porsche was involved in an accident on the first lap of the race. “My start wasn’t too bad, and I was on my up through the field,” Love explained. “I got a push from behind and span, before being hit by another car. The incident brought out the safety car and my Porsche had to be recovered. I’m really sorry for the team. I was looking to make up ground in the race after a difficult qualifying but never had an opportunity to do so.”

The season continues apace for the two FACH AUTO TECH drivers, with the next round at the Circuit de Barcelona-Catalunya from 14 to 16 August hosting the sixth of eight rounds in the 2020 season.