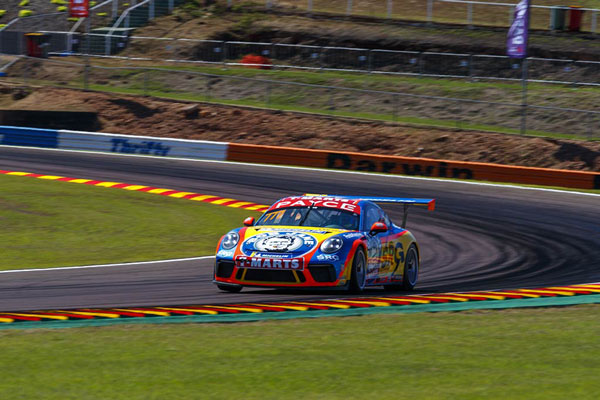 Porsche PAYCE Carrera Cup Australia this weekend embarks on its 15th year in Australia and is equipped with a 25-strong Porsche field to help celebrate the milestone season.

Since the 2018 Gold Coast finale, Porsche confirmed property development and investment company PAYCE as Carrera Cup’s new Title Partner for 2019 – the series’ second major partner in as many years.

This period also saw reigning Carrera Cup champion Jaxon Evans pack his bags and begin his European adventure as an official Porsche Junior driver, opening the door for other young racers looking to climb the Porsche Motorsport Pyramid in the search for an international racing career with the German sports car brand.

Other Pro-ranked newcomers include 2018 Porsche Michelin GT3 Cup Challenge Australia runner-up Cooper Murray and Darwin native Thomas Maxwell, who returns to Australia after a three-year stint in European open wheel racing. Murray and Maxwell will be joined by returning young racers Jordan Love and Cameron Hill in the battle for the Michelin Junior title and the chance to following in the footsteps of Matt Campbell and Jaxon Evans to compete against the best young international Carrera Cup drivers in the 2019 Porsche Motorsport Junior Programme Shootout.

Also continuing is a group of former front-runners who will be looking to capture the title, including 2018 runner-up David Wall, Dale Wood, who won the most races last season, and Nick McBride, who finished last season with a commanding Gold Coast round victory. Adelaide racer Michael Almond will also look to continue his success in South Australia after claiming round victory in Carrera Cup’s inaugural visit to The Bend Motorsport Park. Perth-based racer Josh Hunt also returns with the aim to steer Volante Rosso up the Carrera Cup order in his, and the team’s, second Porsche season.

The ‘Padayachee’ name will have twice the presence in the 2019 field with the return of Duvashen Padayachee. With 32 round starts to his name, Padayachee will race alongside his TAG Heuer Pro-Am ranked father, Indiran Padayachee, in the GWR Australia stable, becoming the first father-son combination to race in Carrera Cup since Stephen and Brenton Grove both contested the final round of the 2017 season in Gold Coast.

Fresh from his third Class B win in the 2019 Bathurst 12 Hour, Stephen Grove returns to Carrera Cup in pursuit of his fourth, and third-straight, TAG Heuer Pro-Am title. However, Grove is faced with arguably the most-competitive TAG Heuer Pro-Am field in Carrera Cup history.

Triple TAG Heuer Pro-Am class champion Max Twigg is back for 2019 in the search for his first Pro-Am title since 2013, while Adrian Flack and Tim Miles, who placed second and third respectively in last season’s TAG Heuer Pro-Am standings, will look to capitalise on experience gained in their first full Carrera Cup season to fight for the 2019 Pro-Am title.

Roger Lago will look to replicate his season-opening form from last year following a clean sweep on the Adelaide streets in 2018, while Adelaide drivers Sam Shahin and Anthony Gilbertson enter their home event with significantly more racing laps than at their maiden Adelaide 500 campaigns last season.

Just two drivers enter the 15th Carrera Cup season having also competed in the inaugural 2003 season: Marc Cini is set to embark on his 297th Carrera Cup race start for the opening Adelaide race while Dean Cook enters his 23rd Carrera Cup round after placing sixth in the 2018 Pro-Am standings. Graham Williams and Dave Stevens have also committed to the 2019 season, as has former GT racer Liam Talbot, who transitions from a Porsche 911 GT3 R to the one-make 911 GT3 Cup model.

The 15th season of Porsche PAYCE Carrera Cup Australia will commence with opening practice on Thursday. Qualifying and race one will feature on Friday, with race two and race three to be held on Saturday and Sunday.

Carrera Cup will again feature a comprehensive broadcast package in 2019; all Adelaide sessions from practice two will be televised on Fox Sports 506 and streamed live on new streaming service, Kayo. All races will be broadcast on free-to-air television; race one will be shown live on 10 Bold with the following two races to be aired on TEN.